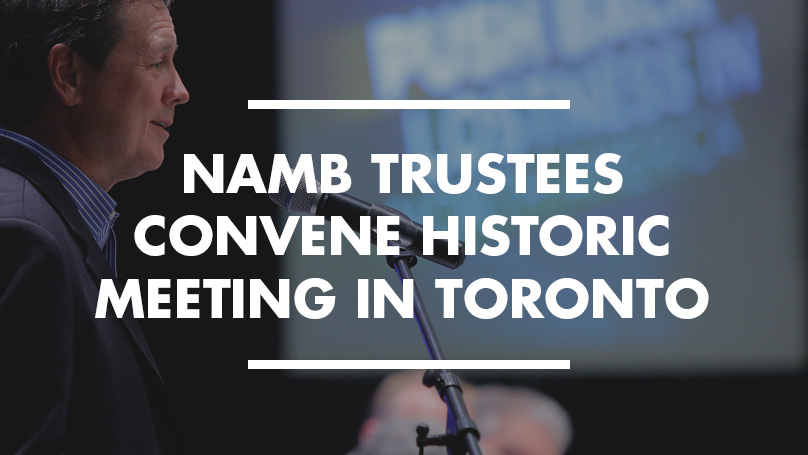 This story was published originally by the North American Mission Board on NAMB.net – Click here to view this story there.

Ezell to NAMB Trustees: There is Still Much to Do

TORONTO – Even in the midst of celebrating momentum and progress, North American Mission Board president Kevin Ezell punctuated his remarks at NAMB’s Oct. 9 board meeting by challenging trustees to remember that, “We are not where we need to be – there is still much to do.”

Ezell’s comments came at the close of three days of historic meetings during which members of NAMB’s Board of Trustees gathered for the first time in Canada. Trustees visited church plant sites throughout Toronto meeting church planters (See NAMB trustees see Toronto’s lostness and its promise). Those planters shared the challenges of ministering in the midst of one of the world’s most culturally diverse cities where half of all residents are foreign born. But trustees also heard how God is moving in the hearts of Toronto residents.

Matt Hess, who relocated to Toronto 15 months ago to start a church, shared the story of a young woman who began attending the small group gatherings leading up to his church launch. Recently she gave her life to Christ. Earlier in the week a planter from Montreal reported 40 baptisms on a recent Sunday in his months-old church.

“We could not do what the King of Kings has called us to do if it was not for the North American Mission Board,” Hess told trustees. “Thank you for the resources. Thank you for the prayers. And please keep it up.”

Jeff Christopherson, NAMB’s vice president for the Canada Region and for the U.S. Northeast Region, spoke at a Canada Celebration dinner prior to the Oct. 9 trustee meeting. He expressed gratitude that NAMB has tripled the resources coming into the nation since 2010.

“We are so thankful as Canadians that you have turned your attention to this country,” Christopherson told trustees. “The fact that you are here today means so much.”

Trustees heard reports from NAMB’s other four regions as well. Also at the meeting:

With savings from the transition, Ezell said NAMB will be able to double church planting funds in 2015 in states such as Illinois, Indiana and Ohio. The shift of funds from South to non-South regions will also allow NAMB to invest $1 million over four years for new churches in the I-29 corridor that stretches from the Dakotas to Kansas City. The funding shift will also provide an additional 15 church planting catalysts throughout North America.

“This is an historic time,” Ezell said. “It allows us to do things we would not have had the funds to do. We are very thankful for our relationship in these states. It’s a new day and we are very grateful for that and very blessed to experience it.”

“The best is yet to be,” Ezell told trustees. “I want to encourage you–do not stand and glare at the past or even pause too much to ponder the present. Because there is a great deal to be done. We are not near where we need to be. But I am thankful for the opportunity before us and thankful that Southern Baptists have sacrificially given through the Cooperative Program and the Annie Armstrong Easter Offering. I am so thankful for the sacrificial gifts of Southern Baptists so we can do what we do.”

Mike Ebert writes for the North American Mission Board.